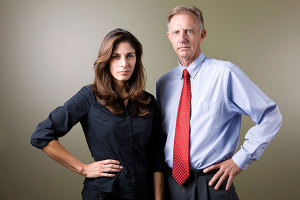 He Said, She Said

‘Don’t judge a person solely by his or her gender.’

In the midst of writing the section of this chapter on gender differences, I decided to ask some blunt questions from my definitely male mind of an expert on women’s marketing, Leslie Prevish. Several years ago, she persuaded Harley-Davidson’s chief marketing officer to create a dedicated marketing-to-women role. Within two years, her team increased sales to that audience by $7 million. Now, Prevish runs her own company, Prevish Marketing — helping organizations become more female friendly.

In a professional persuasion situation, would a woman be offended if she found out a man was taking her gender into consideration?

Not as long as he isn’t offended if she takes his gender into consideration. Men and women communicate differently. Scores of studies prove this, but each person and situation is unique. Some women, especially those in a male-dominated business culture, may communicate more like “one of the guys” by being direct and competitive. Nature and nurture play a role, as well. Young female “tomboys” who ditched Barbie dolls and preferred to tumble around with their older brothers may have been born with a more assertive personality.

We know that male relationships can be competitive as a result of testosterone. In your opinion, why are relationships between women sometimes so contentious?

Women, in general, prefer harmony and collaboration, with a win-win closure being more important than a win-lose ending. I’ve seen many teams of professional women spend an extraordinary amount of time trying to secure full agreement on a difficult decision. Sometimes, those who don’t agree take it too personally and eventually leave the team. Men seem to have thicker skin and don’t ruminate as much over a contentious situation. They’re more inclined to follow the FIDO principle: Forget It. Drive On.

What’s your advice for a male subordinate pitching a female boss?

That’s a loaded question, because a male subordinate could have a female boss whose communication style is more aggressive than connective. And vice versa. If she’s a boss with a strong focus on building relationships, he should find out about her interests outside of work and connect with her on a personal level. That does not mean asking her out. For a female subordinate pitching a male boss, I’d suggest a “get to the chorus, Doris” approach. Come in with confidence, memorize your supporting facts, and outline your recommendation with simple bullet points.

R.E.S.P.E.C.T. Those two high-ranking ladies didn’t get there without earning — and giving — respect to others. Research one or two significant initiatives she’s spearheaded, and tell her how much you respect her for leading them. Don’t patronize her, just show her you’ve done your homework and sincerely value her impact. If possible, meet outside the office for coffee or lunch.

If you had one golden rule for men and women attempting to persuade one another in the workplace, what would it be?

I have two: First, seek to understand each other’s preferred communication style, and work together to appreciate the differences. And second, don’t judge a person solely by his or her gender.